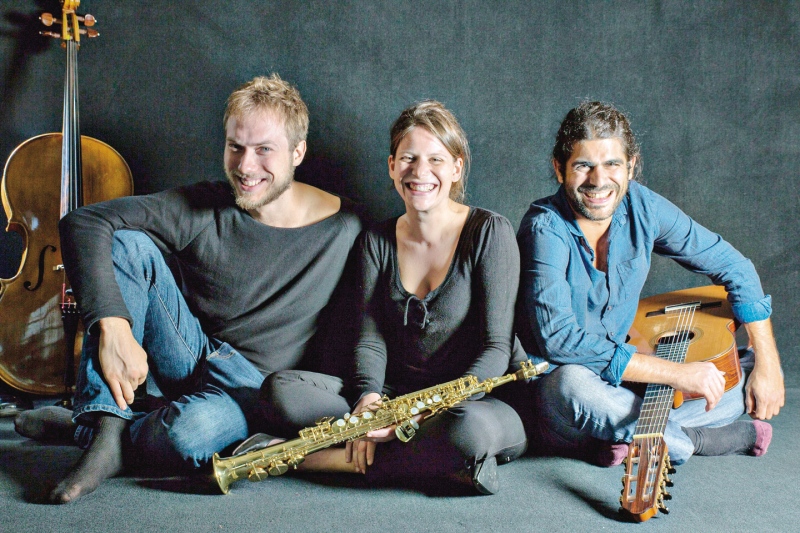 Born of the friendship between the Brazilians Pablo Schinke (cello) and José Ferreira (7-string guitar) and the Italian Giulia Tamanini (saxophones), this new ensemble is bursting with energy and complicity. By combining the flavour and spontaneity of popular music with the expressiveness of classical music, they arrange and interpret the music of great the Brazilian composers such as Egberto Gismonti, Sergio Assad, Hermeto Pascoal, Marco Pereira, Radamés Gnattali. Together, the three musicians create a vibrant sound where the seven-string guitar and saxophone blend into a unique, vigorous and refined body, which has become the trademark of ‘Trio in Uno’ since its beginning in 2014.

In July 2015, they released their first album called «Lilas». The opus was enthusiastically welcomed by the public and critics both internationally and in France (Trad Magazine, Guitare Classique, Paris Guitar Foundation). Their latest album Ipê, released in May 2019, pays tribute to contemporary Brazilian music, described by the press as «An album full of talent and creativity, simply breathtaking! «. They are regularly invited to radio and television shows, including RFI, Super Radio Brasilia, Fm Cultura, Globo Tv. In 2017, the Trio inaugurated the project «Trio in Uno et Orchestre». With its own arrangements, Trio in Uno brings a new aspect to its repertoire. Acclaimed by the public, they performed concerts with the Ulbra Chamber Orchestra (Porto Alegre) and the Goiania Symphony Orchestra.
They have performed and collaborated with renowned artists such as Vincent Segal, Yamandu Costa, Gabriel Grossi, Nicolas Krassik, Marcos Sacramento, Zé Luis Nascimento, Sergio Assad, Marco Pereira, Paulo Bellinati, Cristima Azuma, Daniel Murray. In addition to their concerts, Trio in Uno also conducts workshops and masterclasses to share their experience. Since 2015, the trio has regularly toured Brazil and has performed in prestigious concert halls and festivals throughout Europe.